Chicago’s 580 parks are littered with statues of historically significant men. Some of these men may be familiar to you: Nicolaus Copernicus, Benjamin Franklin, Abraham Lincoln. Others may be unfamiliar: Greene Vardiman Black, for example, the “father of modern dentistry.” While the accomplishments of these notable figures vary, their gender does not. In fact, there is not a single statue in Chicago that honors a historically significant woman.

The lack of public statues honoring women has received recent attention in the local media, and for good reason. In a city home to such important female leaders like Ida B. Wells and Jane Addams, how can public depictions of women remain absent in Chicago’s parks?

The Chicago Park District told WBEZ Chicago that this absence is an issue of timing; the heyday of public sculpture in the city occurred before women earned the right to vote and were therefore not involved in public life. Yet this argument does not explain why men continued to be honored in Chicago parks long after women earned the right to vote in 1920. As recently as 2006, the Chicago Park District has added a new bronze statue of a male figure to its expansive park system.

END_OF_DOCUMENT_TOKEN_TO_BE_REPLACED 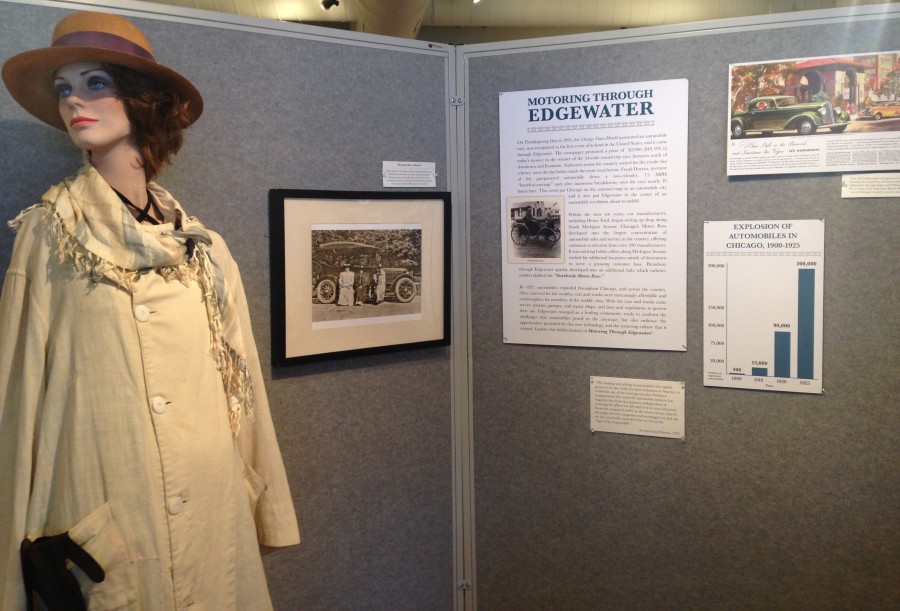 The following review evaluates the newest exhibit at the Edgewater Historical Society, located at 5358 N. Ashland Avenue in Chicago. The museum is open to the public from 1-4pm on Saturdays and Sundays.

Housed in a decommissioned fire station turned historical society, “Motoring Through Edgewater” occupies most of the building’s first floor and is bordered by smaller, locally-oriented exhibits.  The historical society brims with a strong sense of local pride and history, and “Motoring Through Edgewater” reflects that energy.  At its best, the exhibit creatively uses archival materials to connect local history to broader stories of historical and contemporary significance. Although missing rich opportunities to utilize existing scholarship on gender and automobile culture, the exhibit nevertheless epitomizes the value of local history to foster enthusiasm about a community’s past.

The introductory panel represents the strength of the exhibit by connecting a national obsession with automobiles and automobile races to the emergence of Edgewater’s Northside Motor Row. Flanked by a mannequin dressed in the attire of an early woman driver, a chart showing the increase of automobiles in Chicago, and a colorful Oldsmobile advertisement, the panel provides an aesthetically exciting opening to the exhibit.  The advertisement contains the first of several references to Edgewater Beach Hotel, a landmark of local pride important enough to warrant its own exhibit in the entrance of the historical society.

Then, a bold, colorful Sanborn Map of Edgewater’s Motor Row (Broadway Avenue) dominates the southern wall.  Historical photographs, historical advertisements, and contemporary photographs surround the map, illustrating the changing urban landscape of Motor Row. The historical photographs demonstrate change over time, while the advertisements creatively fill in the gaps where no historical photographs remain of past buildings. The panel also introduces several founders of notable cab companies who started their business on Motor Row. Contemporary photographs display evidence of the past that remains along Broadway Avenue and the labels occasionally reference continuing preservation efforts.  This place-based panel jumps around chronologically, reproducing the effect of a contemporary city street with both an invisible and visible past.

The rest of the exhibit is arranged thematically, with section titles like “Off to the Races,” “See You at the Auto Salon,” “Women on the Road,” and “Edgewater on the Road.”  Adjacent panels on “The Parking Nuisance” and “License and Registration!” emerge as one of the strongest sections.  It connects artifacts from Edgewater to early city policies regarding parking and registration, while also referencing contemporary life in Chicago. A collection of license plates from each decade of the twentieth century also visually demonstrates change over time.

END_OF_DOCUMENT_TOKEN_TO_BE_REPLACED

This post is part of a series from Loyola public historians attending NCPH 2014.

We’ve all seen it.  When museums, historic sites, and textbooks realize they need to address gender, the go-to response is to “just add women and stir.”  Sprinkle in a few “great women” to go with the great men or specifically talk about the women who lived in a historic house…usually only when you enter the kitchen.  The traditional male dominated history isn’t challenged in any way.  It’s still the same story, the same narrative, the same interpretation of the site, but now women have  been “included.”

The first panel I attended yesterday morning at NCPH 2014, “Gender: Just Add Women and Stir,” sought to challenge this standard trope.  The facilitators, a number of whom were from the Pew Center for Arts & Heritage in Philadelphia, had taken a study trip in 2013 to historic sites in New England to observe how gender and sexuality were interpreted—or not interpreted—at these sites.

Rather than a traditional panel where the audience is talked at, we immediately began an activity.  The panelists had placed scenes from historic house museums around the room and asked the audience to interpret each room in terms of gender and sexuality.  At first many participants seemed hesitant to imposing any sort of interpretation on these sites.  How were we supposed to interpret gender and sexuality based solely on images without any context?

As someone who attempts to be aware of assumptions and stereotypes based on gender and sexuality, this felt like an exercise in reifying useless categories and stereotypes.  What makes a room, or aspects of it, “masculine” or “feminine?”  Are we talking about 19th century views of masculinity and femininity or 21st century views?  Since societal views about these things aren’t static, but have in fact changed tremendously, there is considerable difference.

As far as interpreting sexuality goes, well there’s all sorts of trouble there.  The living room at the Gropius House in Lincoln, Massachusetts, for instance totally said gay stereotype to me.  Not gay, mind you, but gay stereotype.  I have no idea who used or designed this living room, and I can’t make any sort of judgements about their gender, let alone their sexuality based simply on an image of the room.

END_OF_DOCUMENT_TOKEN_TO_BE_REPLACED

Yes, we are all ecstatic that the semester is over.  For those history grad students pondering the link between history and fiction/literature (shout out to Derrida), here are a few non-history tomes to keep the juices flowing over the summer.

As a blanket statement, all historians should read War and Peace.  In 1869, Tolstoy published his rumination on the nature of history.  Believing that history belonged to the people, not just generals, politicians, and kings, Tolstoy was basically trying to write a social history – comparing the life of the military with the life of the civilian.  His humanizing portrayals of the tsar, Napoleon, and the Russian generals will forever alter your perceptions of those folks.  I know W&P can be scary, so our other 5 books are perfectly manageable. END_OF_DOCUMENT_TOKEN_TO_BE_REPLACED

Periodically, a Lakefront Historian contributor surveys recent public history-related news that emerges on the Internet. In this installment of “Around the Web,” Rachel Boyle highlights new columns, blogs, and posts that exemplify public history online.  She also anticipates the opening of Abraham Lincoln: Vampire Hunter. Follow The Lakefront Historian on Twitter (@LakefrontHist) for news updates as they happen.