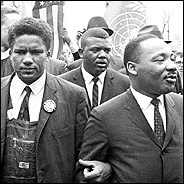 I was lucky enough to catch a pre-wide release showing of Selma earlier this week, when colleague Anthony Di Lorenzo and I braved Arctic weather to trudge to the multiplex. Overall, with a few caveats, I found the movie an effective piece of history that should have a positive impact on the public memory of the Black Freedom Struggle. I have quite a few thoughts about the film—many half-formed—but here I’ll just stick to a few of the themes that struck me most: