This is one of two reviews of “Django Unchained” by Lakefront Historian bloggers. See also ajdilorenzo’s post on the film.

Who would guess that in the past year two of the most talked about movies would be on the topic of American slavery? If you have not noticed yet Lincoln and Django Unchained deal with the history of slavery very differently. Some Americans, interestingly a select few African Americans, have decried the film as irreverent in its revisionism of slavery or paradoxically for its use of the “n-word”. I suggest that the film memorably revises the remembrance of slavery and, in particular, plays to the emotions of modern descendants of enslaved people.

American slavery remains as a stain on our history, one of its greatest philosophical hypocrisies. Slavery for many contemporary Americans is widely considered immoral and shameful yet socially irrelevant in our daily lives today. On the other hand, bring up slavery with an African American and you may get reaction ranging from ambivalence to anger to, more insidiously, shame. What Quentin Tarantino really does with his film is counteract the shame or guilt that occurs when someone asks: ‘why didn’t they fight?’ or ‘why didn’t we fight back?’ when referring to slaves. In fact, Tarantino includes that theme in his dialogue. The character Django is not the slave who is simply worked, branded, sold, and tortured (even though all of those things happen to him); he is the symbol of retribution and the Black hero who independently delivers his bloody judgment on the institution of slavery. Django is the answer to the question, at least in fantasy.

END_OF_DOCUMENT_TOKEN_TO_BE_REPLACED

This is one of two reviews of “Django Unchained” by Lakefront Historian bloggers. See also Courtney Baxter’s post on the film.

In the wake of Steven Spielberg’s Lincoln, Quentin Tarantino’s spaghetti western inspired take on antebellum American slavery Django Unchained risked misinterpretation of its tone and message. Throughout the film, however, Tarantino deftly strikes the right balance between genre bending playfulness and respect for the weighty subject matter. Like his last film Inglorious Bastards, Django Unchained is a revenge fantasy, empowering an oppressed group against powerful enemies. Taking on two of the darkest chapters in human history, the holocaust and racial slavery, while maintaining his slick sense of humor and film geek B-movie references seems a recipe doomed to trivialize and offend. Yet somehow Tarantino pulls it off. 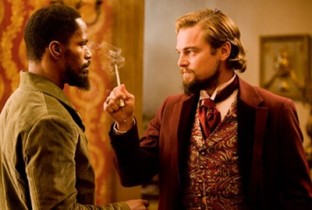 For the record, I have never been as enamored with his work as others. Prior to Inglorious Bastards, I respected his craftsmanship and flare for dialogue, but his movies always seemed hyper referential and lacking in authenticity. It is often difficult to tell where the film geek allusions and homages end and Quentin the auteur begins. His breakthrough film Pulp Fiction, while bursting with style, offered few genuine insights or emotional depth. The promise of this recent turn toward historical (or counter-historical) subject matter is that he has found a way to employ his talent for subverting genre as a means to analyze the process of historical memory. For better or for worse, the movies have become probably the most powerful medium for the transmission of historical knowledge. There have been plenty of films that have focused on the Civil War, but few have  engaged with the savagery of slavery in an immediate way. In Django Unchained Tarantino seems to be saying, “why not remember it this way?” But the key to the success of this approach is that he delivers a serious counter-narrative within the guise of a celebrated and seemingly benign genre, the spaghetti western.

END_OF_DOCUMENT_TOKEN_TO_BE_REPLACED

Lincoln as Challenge and Opportunity for Public Historians

Like all texts, Steven  Spielberg’s Lincoln should be critiqued on several levels. Film scholars will analyze the script and cinematography, while popular press movie critics will judge the work as both a creative and commercial product. Being a historical film, Lincoln has also attracted the attention of academic scholars. But what about Lincoln as a piece of public history? And what are its implications for public historians? These are no easy questions–and their answers can easily morph into an unwieldy meta-narrative of aesthetics, commercial production, and speculation on reception. Here, I offer a just an introduction to the public history context of Lincoln and encourage any expansion or complications of these impressions in comments below.

END_OF_DOCUMENT_TOKEN_TO_BE_REPLACED

Once again a heavyweight filmmaker and a well-selected ensemble cast tackle a defining subject in American history. Once again a blockbuster forces me to reconcile the critical eye of historical training with the evangelical impulses inherent to public history. Hollywood historical fiction is a mixed blessing for public historians in an era when most Americans engage the past through popular entertainment rather than monographs or museums and tend to trust the judgment of respected filmmakers such as Steven Spielberg. Historical blockbusters expose large crowds to important historical subjects, but their biographical and narrative-driven format imposes interpretive choices that all too often minimize the film’s utility as public history. The substantial shortcomings in Lincoln, which my fellow reviewers discuss aptly, result from the genre’s conventions. My main objections include the surprising lack of African American perspectives and agency and the perpetuation of history as emanating from the words and deeds of elites.

END_OF_DOCUMENT_TOKEN_TO_BE_REPLACED

The opening shots were so promising.  A pan of Civil War carnage preceded any mention of Abraham Lincoln.  African American soldiers stood before The Great Emancipator and called him to task on the problem of wage inequality.  Then Lincoln subdued them with a charming anecdote, thus setting the tone of the rest of the film.  In the subsequent two and half hours, a thoroughly endearing Abe ambled through a world of rhetorical and ethical dilemmas, mesmerizing everyone with his storytelling and lawyering skills.  Indeed, Spielberg’s Lincoln succeeded as a comedic drama of white politicians debating slavery while effectively silencing other nineteenth century voices.

END_OF_DOCUMENT_TOKEN_TO_BE_REPLACED

Memory and Reimagining in Lincoln

As I walked into the movie theater to see Steven Spielberg’s newest movie Lincoln, I was struck by the audience in the packed theater. An audience of silver-haired White people filled nearly every seat. It came as a shock to me considering my location in a Chicagoland suburb where the residents are mostly Black and Latino Americans.  Eventually, along with my family and me, a few Black people trickled in (also of an older crowd).  It was a stark sight to see and I considered the topic of Lincoln and the memory of the man. Who was Abraham Lincoln to this audience?  I cannot presume to fully know.

END_OF_DOCUMENT_TOKEN_TO_BE_REPLACED

I found out about the movie Lincoln surprisingly recently.  I honestly had not heard that this movie was being made until about two months ago, but once I found out about it I wanted to go see it.  I love watching movies based on historical events, though I will admit that I haven’t seen as many of these movies as I would like.  My first attempt to see the movie ended when I arrived at the theatre to find that it was sold out for four straight shows.  That in itself sold me on the popularity of the movie even before seeing any box office figures.  I had resigned myself to waiting several weeks to see Lincoln when I received a text message from theatre friend gushing about the technical aspects of the movie and encouraging me to go and see it – I went the next day.