The killing of Michael Brown by a Ferguson, Missouri police officer, and the resulting community reaction, has put police brutality protest in the spotlight. The mass marches, limited looting, and confrontations with aggressive or ‘militarized’ law enforcement that typified the Ferguson protests seem like a relic of an earlier age. Many have been quick to draw parallels to Harlem (1964), Watts (1965), Detroit (1967), and Camden (1971), among others. I would like to add one more historical note, pulled from a chapter that I just so happen to be drafting this month. My case involves several similarities to Ferguson, but it is remarkable mainly because of a difference. The August 12, 1966, Summerdale March in Uptown Chicago was almost exclusively white.

An uncommon density of vacant low-rent housing in Chicago’s Uptown neighborhood and a postwar job crisis at home attracted tens-of-thousands of working-class and poor whites from Appalachia and the south through 1970. By 1960, many considered Uptown the nation’s foremost “Hillbilly Ghetto,” even though the area’s low-income community also consisted of American Indians, non-southern whites, a smattering of African Americans, and a growing Latino population. Uptown’s postwar southerness has been ‘discovered’ time after time by various segments of the dominant culture: urban renewal advocates, social workers, sociologists, psychologists, anthropologists, country music radio executives, the New Left, sisters religious, the War on Poverty, and on and on up through…urban historians.

When the SDS created the Economic Research and Action Program (ERAP) in 1964 to work towards an interracial solution to urban poverty, Uptown was a natural choice for one of the early projects. By 1966, SDS members were clamoring to be part of the Uptown ERAP effort known as Jobs or Income Now (JOIN). Noted organizers like Rennie Davis, Richard Rothstein, Vivian Leburg Rothstein, Todd Gitlin, and Casey Hayden lived in Uptown, undertaking the slow and uneven process of pushing locals towards political action. Early successes included a sit-in at the city welfare office, and tenant strikes that resulted in contracts between collectivized renters and landlords. These efforts antagonized most of the local political and social elites. The notorious “Red Squad” of the Chicago Police Department quickly placed JOIN under surveillance, and soon relied upon information from a local JOIN member who had become disgruntled with the outside activists’ “Unamerican” opinions about increased involvement in Vietnam. A law student soon infiltrated JOIN on the CPD’s behalf.

Meanwhile, patrolmen from the local precinct prosecuted an aggressive policing of Uptown low-income teenagers and young people. When outside JOIN organizers—operating under the banner of “participatory democracy”—sought to create political consciousness around the grievances expressed by locals, police brutality came to the fore. JOIN leaders were mostly unprepared and unwilling to base organizing around the issue, preferring instead to confront economic injustices and the shortcomings of the local War on Poverty “Urban Progress” program. Yet anger simmered, most notably with the politicization of the “Uptown Goodfellows,” a street organization of southern and Appalachian tough guys. The Goodfellows took cues from similar black and Latino groups that were beginning to evolve from gangs into political units.

Read the rest at dvhunter.com

For the 10th Annual Loyola History Graduate Student Conference, the LUC Public History Committee will host a roundtable on “Social Justice, Sustainability and Activism in Public History.” This is a post that introduces a case study on the topic. The Committee welcomes participation both online and at the conference. If you have an example of Social Justice, Sustainability or Activism in Public History, please feel free to mention it as a comment on the blog, or contact the blog editors to request the opportunity to author a guest post. For more information on the Conference and the Roundtable–to be held November 9 at Loyola’s downtown Water Tower Campus – click here.

END_OF_DOCUMENT_TOKEN_TO_BE_REPLACED

In Conjunction with the 10th Annual Loyola University Chicago

You are invited to participate in a roundtable designed to foster discussion about the active roles of historians in promoting social justice as well as social and ecological sustainability. The roundtable features Dr. Paul Schadewald of Macalester College, graduate student conference participants, and public history professionals from the Chicago area.

Follow the conference blog or the Lakefront Historian to view a detailed introduction to the roundtable, consider pre-circulated case statements, and offer your comments and contributions.

Attend the roundtable prepared to discuss your experiences with social justice and sustainability in public history as a patron, staff, or stakeholder in an institution that engages the public over historical topics

Attend the roundtable, and be willing to informally engage participants and fellow audience members about the topic.

Simply attend the roundtable and listen. 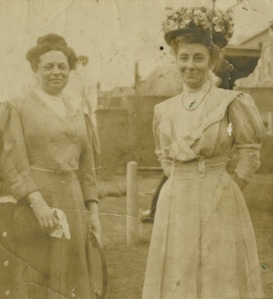 As part of a summer research project sponsored by the Women and Leadership Archives at Loyola University and the Carolyn Farrell, BVM, Professorship in Women and Leadership, I created an online exhibit exploring how the women of the Chicago Woman’s Club (CWC) shaped ideas about crime and proper womanhood around the turn of the twentieth century.  My research yielded troubling questions about the ways in which we historically—and contemporarily—talk about violent femininity.

I encourage you to explore the exhibit for some delightfully colorful language that makes the early Progressive Era an entertaining period of study.  In the meantime, here’s the main gist: the white affluent women of the Chicago Woman’s Club considered it within their distinct purview as wives and mothers to protect and reform delinquent children and criminal women in order to make Chicago a better, safer city.  Members of the CWC saw criminal women and delinquent children as both causes and victims of urban crime, a perspective which positioned the clubwomen as saviors of the women, children, and the city.

END_OF_DOCUMENT_TOKEN_TO_BE_REPLACED

At the risk of blaspheming as a historian, I declare that I dislike old stuff.  I am growing impatient with public history’s traditional fetishization of physical objects and buildings.  Certainly manuscripts, objects, and buildings serve a critical role in the historical record as access points for dynamic historical inquiry.  Yet I maintain a strong aversion to the esoteric enjoyment of looking at and talking about old stuff.  Distaste occasionally turns into outrage when I exit a classroom or museum and encounter the very real products of systemic poverty, historic racism, and structural oppression.

The suffocation of a static, object-oriented past dramatically contrasts with the invigoration of engaging with the public.  The most thrilling conversations originate when I tell someone that I study history and they inevitably share their passionate, personal version of history.  A retail coworker enthusiastically discussed history as a series of major local events happening in real time, like the construction of rapid transportation.  A restaurant waiter wanted to know more about international history, particularly the historical relationship between the Philippines and the United States.  Anyone who takes the time to listen to the public’s interest in history will find intense personal investment in the intersections between past and present.

Listening to the public ought to be the first step any public historian takes.  Only when we take the time to find out what a community wants and needs can we respond in our fullest capacities as public historians.  If we treat communities with respect, then they might allow us to respond and even push back with our perspectives as trained historians.

Present-day communities, rather than historical resources, ought to be our departure point for the work of public history.  Old stuff does not have objective or intrinsic value; in fact, the old stuff we save and adore often reflects the values of a dominant culture responsible for historic oppression.  The work of the public historian can be so much more powerful when we choose instead to advocate for historically oppressed communities.  Public historians can embrace a socially relevant and provocative role beyond serving as guardians of old stuff.

A public-oriented concept of history is not new or even that radical.  But as I navigate the worlds of academic and public history, I am increasingly convinced that the civic responsibility of public historians needs to be better emphasized.  I would even like to envision a future where the primacy of community is an assumed foundation of public history.