About the three weeks ago I returned from my third trip to England and it seems like every time I visit the United Kingdom it changes my views about America. This last trip around central England, the Midlands, led me to the National Memorial Arboretum. The National Memorial Arboretum lies outside of Lichfield and was officially opened in May 2011 as a “living memorial” to all British service men and women, with individual memorials to particular brigades, infantry and the like. The contributions of allies are also honored, for example Jewish and Polish servicemen. Uniquely the memorial also honors victims of infant mortality and children affected by war and conflict in its “Garden of Innocents” (notably Anne Frank is specifically memorialized by a tree that is never allowed to bud, symbolic of Frank’s life).

Upon entering the arboretum, amongst all the individual memorials and gardens, I immediately noticed a large memorial on a man-made hill at the center. This memorial was dedicated to all British service men and women killed in war since 1945. The Armed Forces Memorial seemed to naturally pull all the visitors to it. Admittedly, I cannot say that I have ever been particularly drawn to war memorials but this time was different and that is why I had to share my experience. Typically, the war memorials that I have seen in America portray grief in the sullen face of a bereaved solider or show a heroic captain in his glory. Something always seemed false to me about popular remembrance of past wars.

When I made it to the hill where the Armed Forces Memorial was located there were two major bronze works, created by Ian Rank-Broadley, their were curved walls inscribed with names of the fallen.I was shocked by what I saw. In fact there were a number of things that surprised me about the sculptures. I have heard Europeans say that Americans are a bit prudish and maybe they are right because I almost immediately noticed that the depicted fallen soldiers were nude. In American society nudity typically denotes two things: sexuality or vulnerability. Certainly, there was vulnerability in these memorials unlike the strength one typically sees in soldiers’ memorials. Memorials such as this now remind me of the flexibility of remembrance. I began to realize that I had never seen soldiers depicted in death at a war memorial (I am not claiming that this is the only depiction). It was a curious thing to see death displayed at a memorial; one sculpture depicts mourning family members in various states of despair as well. It was evocative of the very real experience of war which many times involves tragic loss. The memorial also makes a point to include women three times in the sculptures, twice as mourning family members (a wife and a mother) and once as a solider attending a male fallen solider, a move that seemed to me to be a more inclusive representation of women’s roles during conflict. 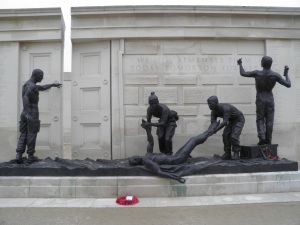 Finally I turned my attention to the walls inscribed with veterans’ names. Of course, names on memorial statues or memorial walls is nothing new (my uncle’s name appears on the Vietnam Veterans Memorial in Washington DC and here in Illinois). What was missing was more thought-provoking to me than simply what was there. As visitors look across the engraved names then you realize that there are panels still empty and waiting vacant for more fallen soldiers names, ever increasingly being filled with causalities of conflicts in Afghanistan and Iraq. 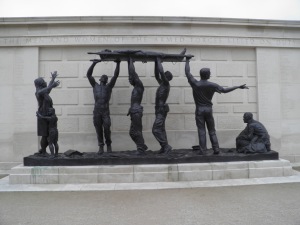 My visit to the National Memorial Arboretum touched me because it dares to speak on some of the realities of war while still honoring the fallen. As historians, who may be consulted in memorials such as these, what is the balance between honoring the dead and depicting reality (in its multiple forms)? The memorial also led me to think about the sensitive topic of memorials as propaganda, is that ever appropriate and if so, to what degree?