The Genghis Khan exhibit at the Chicago’s Field Museum, open until September 3, 2012, draws visitors by posing the question, “Who was Genghis Khan – a ruthless warrior, or a revered statesman?” It provides fascinating pieces of information on both sides, as well as a glimpse into nomadic Mongolian culture and life. 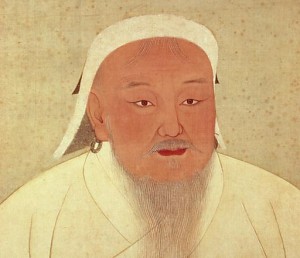 This exhibit has many real strengths.  The Field Museum partnered with the Mongolian Embassy and was thus given access to many rare cultural artifacts, such as bows and arrows from the 13th and 14th century, on loan from the National Museum of Mongolia. Materials on the exhibit claim that it is “the largest single collection of 13th-century Mongolian artifacts ever assembled.” The exhibit uses different forms of media, including video; projected, animated maps; reproductions; and music to engage the patron.  This range allows access to the information on different levels. The sophisticated use of media and the excellent flow through the exhibit enhance the overall experience and are no less than what one expects from a museum of Field’s caliber.

The museum is at a great disadvantage in creating this exhibit. Much of what is known about Genghis Khan comes from legend and one written account, The Secret History of the Mongols, a history written after his death. There are also very few artifacts in existence that relate directly to the Great Khan. His were nomadic people, and all the plunder that was associated with his conquests was buried with him, along with all the soldiers who made his grave. This must have made it very difficult for the curator to create the exhibit around the legendary man. What the exhibit does instead is turn its attention to the Mongols, both past and present, to showcase how the empire Genghis Khan founded could have come into being.

The depiction of Genghis Khan’s early life sketches personality traits forged in hardship and genealogy.  However, the relative dearth of information and artifacts related directly to Genghis Khan means that the man himself is not fully revealed.  Rather, the exhibit points to accomplishments and innovations that can be traced to him. Clearly, Genghis Khan was a successful warrior, and the exhibit turns to the ways in which war was conducted, the skill and versatility of the Mongol warriors, the empire itself, and the successors of the Great Khan.

Having conquered vast swathes of land in the Eurasian continent, the Mongols were faced with the challenge of controlling and ruling this territory. The introduction of a written language, a system of laws, passports and currency facilitated this enormous task. The exhibit highlights the Mongolian capital at Karakorum where craftsmen from around the empire plied their skills and transferred their knowledge, and the unification of China under Kublai Khan, establishing the Yuan Dynasty. Finally, the exhibit brings the patron to modern Mongolia, tracing its lineage back to Genghis Khan.

By the end, however, the question posed at the beginning is still not answered. Was Genghis Khan a ruthless warrior or a revered statesman? The exhibit abundantly demonstrates his prowess as a warrior, but beyond mentions of instilling fear, there is no evidence given of ruthlessness. Was he a statesman? Again, the exhibit demonstrates his capacity to bring together peoples and adopt foreign inventions, but his work is not well articulated or interpreted. The patron is left to make the connections between the man and the legacy.

If you would like to explore the exhibit, but can’t make it to the Field, check out the website by clicking here.

One thought on “Interpreting a Legend at the Field Museum”