Illinois-based supermarket chain Jewel-Osco has announced that it will begin eliminating self-checkout lanes at a select number of their stores and plans to cut more in the future. They claim the major reasons for the shift are theft and customer satisfaction. The devices include glitchy/insulting weight sensors that prevent customers from bagging items that have not been scanned. In my limited experience with them (full disclosure: I am a Luddite) these marvels of labor-saving technology counter-intuitively require a living employee to approve and complete my transactions. Seemingly, the mere act of scanning and bagging groceries triggers these machines to suspect my character and withhold services until human reinforcements arrive. Inevitably, I turn indignant and fantasize about slamming a 28 oz. can of whole tomatoes through the screen and inciting other patrons to do likewise. Minutes later, an exasperated employee arrives, allowing me to complete my purchase without actually searching any of my bags, but not before my daydream has escalated to a Terminator-esque war against Skynet. 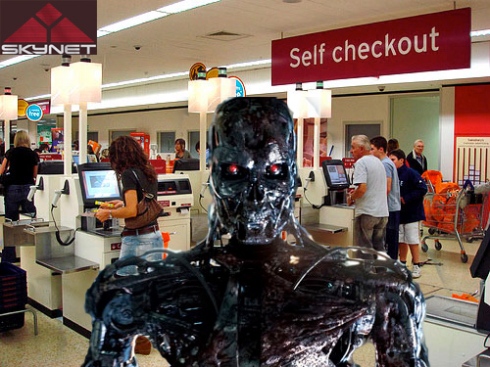 While self-checkout has been around since 1998, the concept of an efficient grocery store requiring less staff and garnering higher profits was the super market’s founding ideal during the 1920s. At that time and earlier, the grocery business was dominated by small specialty vendors in densely populated competitive marketplaces. In such an environment customers (most often women) had authority, haggling with merchants over prices and the quality of their produce. Without satisfaction, a customer could very easily take their business to the next vendor on the row, to procure the same product at a better price.

Super marketeers did not gain an easy foothold in such a culture. Even though these new grocery institutions offered flat low prices, a greater variety of products and one-stop-shopping, customers wanted to haggle with merchants in busy marketplaces. Supermarkets definitively could not offer such an experience, because they were based on managerial control of prices, the efficiency of wholesale purchasing at scale and fewer employees. Only after the Office of Price Administration had made consumer purchasing safe and patriotic, through setting prices during the Second World War and favoring larger businesses, did supermarkets begin to gain traction. Their rise to food distribution dominance was capped however not by their function, but by their advertising in the post-war era. Mass ads on the radio, in newspapers and on the street trumpeted that supermarkets had the lowest prices, were hassle free, convenient, clean and well organized. Most importantly, however they hegemonically proclaimed that this was the type of store where women preferred to shop. This notion stuck in the era of material abundance embraced by young, mobile and impressionable families.

The self-checkout lane is a continuation of that trend towards merchant authority over exchange, as a labor and money-saving tool utilized by big box grocers (and other retailers) in the name of customer convenience.  In a store where there are many check-out lanes facilitated by people, as well as several self-checkout lanes, the claim to convenience seems somewhat viable. But more often than not, there is only one staffed checkout with a line a mile long adjacent to the hellscape of self-checkout limbo, stuffed with frustrated customers and one poor soul trying to facilitate their operation. In such instances, the meaning of these devices is clear – owners use them to replace employees, because they cost less and because customers put up with them.

Jewel-Osco’s decision to begin rolling back self-checkout reflects their bottom-line and a resistant clientele. Customers either are not putting up with them (I have not self-checked in two years) or are willing to play fast and loose with the basic ideas of monetary exchange (if not flat-out stealing the cash drawer). Eliminating self-check lanes and replacing them with people must have seemed to be a viable solution given these realities. Beyond the economics, in my opinion it is also a social and civic good to employ people rather than computers. Moreover, Jewel-Osco’s decision reflects a rare moment of consumer democracy in action, when customers actually impact business choice and curtail technological “progress.” While some grocers, like Costco, are going in a similar direction as Jewel-Osco, unfortunately others, like Wal-Mart, have decided to increase their use of self-check kiosks by an additional 10,000 lanes nation-wide.

3 thoughts on “Skynet down at Jewel-Osco: The Grocer’s Progress”