Note: This post originally appeared in my blog, Navigating New Media, which follows my journey through the Digital New Media public history course here at Loyola University Chicago. I encourage you to follow my future posts, as well as those of my classmates. Check out the blogroll on the class website!

I started using Twitter last summer during my internship with the Nantucket Historical Association as a way to post updates of my glamorous (and sometimes not-so-glamorous) #internlife. I shared photos of the painting workshops I ran for the NHA (and the wonderful ladies that came every week), the special events that we hosted at the Whaling Museum, and other historic sites that I visited on the island during my runs, bike rides, and beach days. It began primarily as a way for my friends and family to see what I did everyday and for me to share my exciting experiences, like taking our ArtifACK Cart out on to the museum floor.

Eventually though, I realized Twitter was something even greater than a simple microblogging platform. Twitter was more than a medium for sharing articles and other interesting finds on the internet. Twitter was a way to informally, but directly connect with historians and museum experts that I had always wanted to engage with. It made me feel like an important and contributing part of the #publichistory profession. And, because of this, I quickly realized that Twitter was the most incredible thing I had ever used. Again, bold statement (What is it with me and making bold, sweeping statements today? #problematic #letsthinkaboutthis #butreally). But it allowed me to share my thoughts in a concise and immediate manner with a network of public history and museum professionals. And they could respond, they could challenge me, they could reinforce what I was thinking, they could offer different perspectives. The ability to interact and network so concisely and so quickly with others in the field have made me feel more connected and included in the field, even if I’m still just a student at the very beginning of my professional career. I think, also, that this level of interaction has helped create a more inclusive and unified field, as it becomes easier to share new research, interesting finds in the archives, or important news from professional conferences like the National Council on Public History or the Society of American Archivists.

For our Digital New Media class assignment this week, we had to follow five public historians or museums and five topics that related to public history. Although I was already following a variety of museums and historians – both academic and public – I did realize that I wasn’t following one of my favorite museum experts (#fail), Nina Simon, Director of the Santa Cruz Museum for Art and History, writer of the incredible blog Museum 2.0, and participatory museum extraordinaire! With that shortcoming quickly resolved, I started experimenting with TweetDeck, which allows you to follow all of your Twitter activity in one place, including certain topics. Of everything I followed this past week (including #HistoryLove and #MuseumSelfie), the most interesting topic turned out to be #HistoryPics. Why is this? First, most of the images originate from one source (@HistoryinPics), and the majority of people using the hashtag are not professional historians or archivists. Most of them are just people who have found interesting historical (or so they say) photos that they like or that relates to their Twitter cause, personal brand, or business. Take for example this photo originally posted with the #historypics hashtag by @MentalityMag:

Cute dog. But what’s missing here? A LOT. Why was this photo taken? Who took it? What was it used for? Where was it originally printed? Where did it come from? An archive? A personal collection? Who owns it today? Where can I find more information about it?

And thus we come to one of the shortcomings of Twitter and its 140 pledge: a lot gets left out. The fact is that most people will look at this photograph, read the 140 or less character caption, and say “Cute dog.” Or “Patton was cool.” Or “Patton had a cute dog.” Or “America was better with Patton and cute dogs.” Anyway, there is a lot of information missing on Twitter about the production and use (both past and present) of historic photographs.

But wait, it gets better. Not only is there a lack of information about the source or critical engagement with the photograph, but there is, more often than not, no citation or attribution attached to the photograph. And for historians, this is pretty problematic. It’s like writing a book without footnotes. In historical writing, footnotes allow readers to learn where a source came from and how to access it themselves. This allows a reader to gather more information about a source, as well as to check the author’s accuracy and authenticity. Books without footnotes are regarded as unreliable history. But photos without footnotes or attribution on Twitter seems to be ok.

Should we be ok with this? With advances in technology, people can easily alter real historic photographs and make things appear…not quite accurate. Or they can simply say anything about a photo, even if it might not be true. But without attribution, how can we prove thesis false or altered? How do we know Nikola Tesla was not a swim instructor as @HistoryinPics contends? (Answer: he wasn’t. Too bad though.) 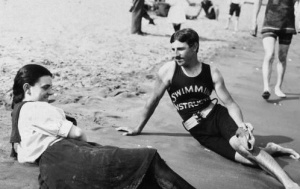 This photo was tweeted by @HistoryinPics, but was later taken down after it was found (on sites like Matt Novak’s great blog, Paleofuture) to be of a man who simply looked like Tesla from a distance. In real life, Tesla was likely arms deep in some kind of crazy electrical experiment, not on a beach teaching this dark-haired lady how to swim. But unless you are a Tesla expert, you might take this photograph as historical truth.

What is more interesting though, is that once one person posts a photo, IT GOES VIRAL. I mean, as viral as historic photographs can go. It gets reposted again and again and again. And every time it gets reposted, it still does not get proper attribution. In this way, the Twittersphere only perpetuates historical fallacies or inaccuracies by allowing improperly cited and unverifiable photographs to pass from user to user to user.

PS- For a great Twitter profile for someone who does think of these issues of citation and attribution and treats them in a sarcastic though effective way, take a look at @AHistoricalPics!

One thought on “History in 140 Characters: Historical Accuracy in the Twittersphere”