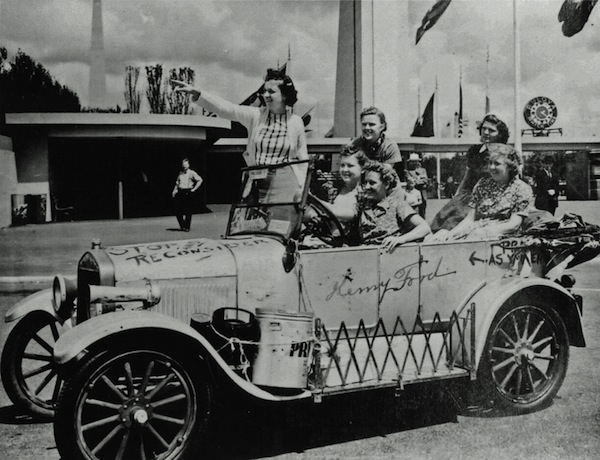 When I began my internship at the Peoria Riverfront Museum this past May, I had a vague idea of what to expect. I had put together a small panel exhibit at Marquette University, and I had also developed a small exhibit for the Milwaukee County Historical Society. But I had never produced an exhibit that would serve as the main feature of a gallery. The Gypsy Coeds Ride the Silver Streak will occupy 2,000 square feet at the Peoria Riverfront Museum beginning this Friday, October 16, to January 17, 2016. Sifting through research materials and finding objects to feature in the exhibit was a rewarding and challenging process, and after fifteen weeks I feel like I learned more about the exhibit development process and how a small museum operates.

Twenty young women from Bradford, Illinois, traveled the country in a silver 1926 Ford Model T over eight summers in the 1930s and 1940s. They called themselves the Gypsy Coeds, and they dubbed their old “flivver” the Silver Streak. Wherever they went—Canada, New York, Atlanta, or California—they drew a crowd. Everyone wondered how these girls could travel across the country without a proper chaperone. The crowds were also astonished that the ancient “tin Lizzie” still ran! After all, by the last trip the car was sixteen years old. But the girls trusted the old Ford, and their story struck a chord with townsfolk and celebrities across North America.

I started work on the exhibit in the middle of May, and Kristan McKinsey, my supervisor and curator of the museum, already had a wealth of information for me to process. McKinsey had heard about the Gypsy Coeds from a museum member and had contacted John Butte, the owner of the Silver Streak. Butte had already begun extensive research on the Gypsy Coeds and the Silver Streak in preparation for writing a book about the trips. He had also developed a website about the girls and the car. Butte shared many of the objects he had at his disposal; his mother was a Gypsy Coed, and she collected many souvenirs on her trip in 1939. I had many resources at my disposal, and I was confident that I could put together a fun and educational exhibit.

McKinsey suggested that I begin by brainstorming ideas of what I wanted the exhibit to have in it; how would I convey this remarkable story? My interest in oral history led me to think of incorporating that element some how. McKinsey had also informed me that the museum had an interactive touch-screen, and she wanted to use it to trace the routes of some of the Gypsy Coeds’ more significant trips. But I also incorporated more traditional exhibit elements: labels, objects, and photographs. After discussing my ideas with McKinsey, she suggested creating a project timeline. After creating the timeline, I dove into the research.

Appealing to the Masses

How did the Gypsy Coeds relate to the larger narrative of American automotive travel? The girls had met Henry Ford on various occasions, and corresponded with him over many years. This relationship was unique, and its story had to be told in this exhibit. Butte had already been to the Benson Ford Research Center at the Henry Ford Museum in Dearborn, Michigan, where he found the letters from the girls and Ford’s responses. He also discovered photographs of Ford and the girls taken by the Ford Motor Company’s photography department. These items were important to the Gypsy Coeds’ story, but I knew there was an even larger story about Ford to tell. I wanted to talk about how rare it was for these young women to have a relationship with one of the most famous innovators in American history. In conducting this research, I stumbled upon the Vagabonds, a camping group that included Ford, Thomas Edison, Harvey Firestone, and naturalist John Burroughs. Ford had taken road trips like the Gypsy Coeds (in much more style, of course)! I knew I had to talk about this connection in the exhibit. It might be a surprise to many people, and it made the Ford and Gypsy Coeds’ relationship even more interesting.

To appeal to some of the car buffs out there, I chose to include a little history of the Model T as well. I conducted some initial research about the car on my own, but I also wanted to talk to an expert who could make the history of this revolutionary automobile come to life. Butte put me in contact with a local man named Ron Dupree. Dupree can be called a Model T expert: he has restored three Model Ts, and he has stacks of Model T paraphernalia. I decided to sit down with him and record our conversation about the history of the Model T; hearing someone talk about the car in plain language would be much more interesting than reading about it on a label. Dupree was a great collaborator to have on this project; he was very willing to share his extensive knowledge, and he loaned the museum Model T parts, service manuals, books, and paraphernalia for display. He even gave me rides in two of his Model Ts! His knowledge and collection really brought the girls’ experience to life.

McKinsey wanted to be sure we highlighted Route 66 and its importance to the story of American highway travel. Much of the research had already been done last summer, but I wanted to highlight a few stops along the route. For example, the Ariston Cafe in Litchfield, Illinois, is within driving distance of Peoria. It is the oldest restaurant along Route 66 that is still in operation. I knew the Gypsy Coeds had stopped in Litchfield, and later found out that they had eaten at the cafe. With this in mind, I decided to include in my label about Route 66 various stops that the Gypsy Coeds could have made or did indeed make. I highlighted places that represented a tourism industry that largely sprang up because of Route 66: motels and auto courts, cafes, and service stations. I chose places that are all within driving distance of Peoria and included QR codes which, when scanned by the visitor, led to each site’s web page. I hope that including these sites within the exhibit may inspire people to take even a small road trip of their own and experience some of the historic “Mother Road” traveled by the Gypsy Coeds.

I also wanted to tell the story of the individual girls. Doing so would help visitors connect with the Gypsies on a personal level. Some of these ladies traveled around the world after their trip in the Silver Streak; others stayed close to Bradford for the rest of their lives. How do I give equal attention to all when there is more of a story to tell with just a few? It took outside collaboration with many different people to get the stories right. The descendants of the Gypsy Coeds are spread across the country, and trying to work with each of them to give justice to these women’s life stories proved difficult. But many of them were very excited about the exhibit and happy to help in any way they could.

The knowledge I gained in material culture proved helpful in determining which objects to include in the exhibit. I constantly kept in mind what story I wanted to tell, and I had to determine which specific objects could tell that tale. To do so, I had to know the biography of each object and its multiple contexts. I also came to more fully appreciated the importance of visitor studies; however, I also learned the intricacies of museum administration. The relationship between the different departments can be an interesting dynamic to understand: the development office has slightly different objectives than the programs office, but they all work together to fulfill the mission of the museum: “To inspire lifelong learning for all – connecting art, history, science and achievement through collections, exhibitions, and programs.”

One thought on “Gypsy Coeds Ride the Silver Streak”