Heaven’s Vault is a recent PC game by Inkle (the studio behind 80 Days, an excellent interactive fiction adaptation of Around the World in Eighty Days). In particular, it is a game deeply concerned with the past. But… not our past. The game places you in the role of Aliya Elasra, an archaeologist living in a very foreign world – or, more accurately, worlds. Her Nebula is a beautiful space populated with distant moons and the flowing waterways that connect them. She is accompanied by a ancient robot, and travels in a skyship that’s a thousand years old. But for a game with such a intriguing but fictional universe, it still manages to depict the process of historical thinking better than anything else I’ve ever played.

See, Heaven’s Vault is a game about knowledge and understanding. To proceed, it’s not a matter of overcoming enemies or physical obstacles, but piecing together information. The core puzzles in the game revolve around language: you explore environments to find ancient inscriptions, building a working dictionary to translate them as you go. This allows you to understand your finds and draw larger conclusions about what has happened in the past. And – as often in history – each question you answer only raises further questions in turn.

One major mechanism that allows all this to happen is the game’s timeline. As you discover things about the past, you automatically place markers that contextualize when they happened and how they relate to other events. But Heaven’s Vault has a particularly rich implementation of that simple concept. The notations and dates are tentative and theoretical – perhaps your first assumption is a particular site dates back thousands of years due to the stones used in a prominent statue. But then you come across an artifact whose design is much more modern, placing it as only a few hundred years old.

How can both make sense in the same context? Well, the discoveries are also realistically messy: maybe the reason you misdated the site is because it was actively used and developed over hundreds of years by different people itself. Historical eras are not hermetically sealed. Instead, the game naturally leads you to see the interactions of a fluid past, where one civilization may have built an object for one reason, only for a much later civilization to reclaim it to imbue with different meanings and context. 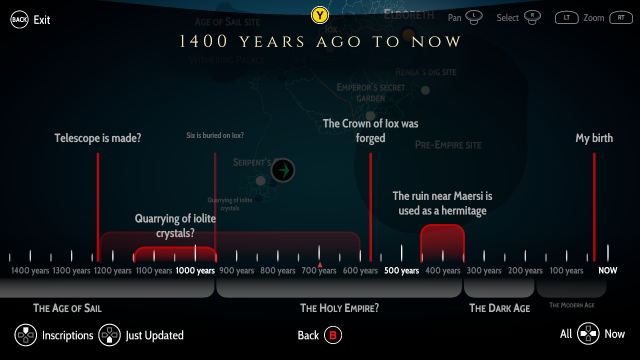 But perhaps the best part of all is the way that this timeline extends all the way to the present. On the same screen, you can begin with the fall of an empire two thousand years previous, then scroll forward to a formative event in your childhood, and finally all the way to that time you almost fell off a bridge five minutes ago. In this way the game subtly shows that everything is history, and that the player themselves are not a disconnected neutral observer. The mere process of doing your research and making discoveries is a historical action in and of itself.

I have to admit, I am not an archaeologist, and my areas of study are extremely modern, not ancient. I’m also only partway through the game… there is a whole mysterious plot going on in the game’s present day, and I’m not exactly sure where it’s leading. But there’s something extremely compelling in the core way that Heaven’s Vault understands history, and empowers the player to see research itself as a fulfilling pursuit.

I’ve always seen the process of ‘doing history’ as interesting and fun. For anyone who has trouble understanding that, I think I now know exactly where to point them.